Sorry about being away for so long; my school life was getting in the way a little there. Fortunately, I graduate in a few weeks! I'll still have a few tests here and there, but for the most part I will be able to be much more active. I hope to be churning out that Creatures content for your enjoyment on a somewhat regular basis from here on in.

On a slightly more negative note, much of my enthusiasm for my previous worlds has died. Please don't expect to see a whole lot from my old C3/DS worlds anytime soon. However, I may return to my C1 world. It is very hard to abandon creatures you have spent at least five hours raising! I think that the best way for me to ease back into writing for Norn Tree is to start something new, and something I've always wanted to give a try is a population experiment. Some of you may remember that I attempted something similar to this with the Tionia world, which was very short-lived due to not going to plan at all. This time around, all groups will be in separate metarooms. I'm not looking for speciation in this world, although we may end up seeing something along those lines. Instead, I'm looking at how different starting populations end up progressing.
To begin with, there will be four populations. These will all have different amounts of norns. The starting populations are as follows: One male and one female, one male and two females, one female and two males, and two males and two females. All will be put in separate metarooms that are not too big, with water sources blocked off so nobody drowns. All starting norns will be Chichis. No population will have to share with Grendels or Ettins. The only competition the norns will have will be their own colony mates.
I have some theories as to how each population will fare, but only time will tell if these theories are correct or not.
One male, one female: The population growth will probably be fairly slow here, with only one breeding pair to begin with. Competing for food shouldn't be a major concern for them, but reproducing often enough to sustain the population might be. With the population being restricted from the start, there probably won't be as many chances for beneficial mutations that will aid the survival of the group to happen. All this being said, norns do breed like rabbits; these issues may not be issues at all. If either initial norn dies before stability is reached, its over for this population, so they need to really hope for the best.
One male, two females: Breeding won't be too much of a concern for these guys. If all goes well, this population will be able to have at most two pregnancies happening at once in the beginning. This means more security for the breeding prospects of the future, and more likelihood for a beneficial mutation to crop up. With the potential for such regular population growth, food may be a slightly bigger issue. This population needs to hope that the one male doesn't die before another hatches.
One female, two males: This group has the best of both worlds. Population growth shouldn't be too rapid due to there being only one female, but having two males around increases the chance that there will be a mate available when she's fertile. Similar to the other two populations, if the one female dies before another can hatch, they are doomed.
Two males, two females: Breeding won't be a concern for this group at all, and one death won't be as devastating. In fact, the main concern here will be eating all the food. This population will get huge, and most of the mutations will probably happen here.
The Beginning
The first group to be completely hatched is the two males, one female group, which dwells in the Lost Cave. I replaced the elevators there with elevines, as the last time I used this metaroom I had some glitchy shenanigans with the elevator. I'm not going through that again! The three already seem to be getting along great. 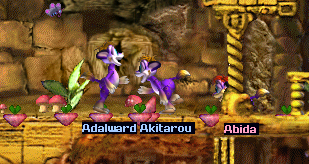 The next complete group is the two males, two females group, who have received the Norngarden as their home. They got the biggest room purely because they'll need it, and I've replaced all elevators here with elevines to avoid elevator clusters.

The one male, one female group got Terra Pluvialis, the smallest room. I figured they probably wouldn't need as much space. 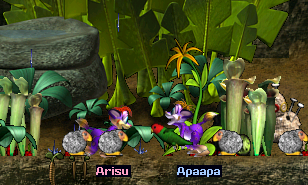 Finally, all members of the two females, one male group emerge. They got the Silence Falls metaroom, and nobody seems to have been inclined to use the elevator yet. 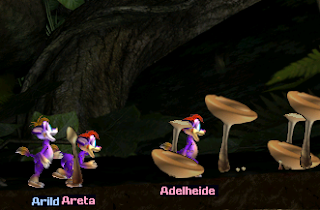 I have one main thing to say about the pond in Terra Pluvialis, and that thing is: yikes. I ended up removing most of these with kill hots.

I've been maintaining food sources from each room in the Norn Meso so that I can easily replace any sources of food that completely disappear; the tomeckos from the Norngarden are pretty vulnerable to that, I've found.

I've also been transplanting tubas to each room whenever I can, extra food sources are always helpful. They've been particularly successful in Silence Falls. All this transplanting has given me something to do during quiet periods.

The Second Generation Begins
Unsurprisingly, the Norngarden group is the first to have a pregnancy. Agnes here is the one carrying the egg. Hopefully, the other groups will soon begin to expand as well. 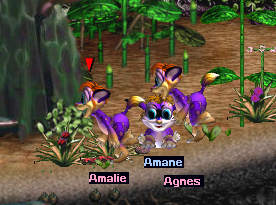 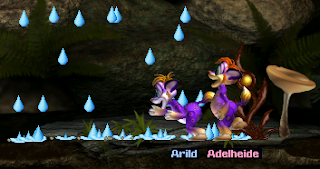 Bertholde is the new addition to the Norngarden population, and she isn't very unusual at all. The only differences she has from her parents is that one of her arousal potential genes got switched from digital to inverted digital and some very minute colour changes. Hopefully that first one doesn't affect her fertility.

Soon enough, there's a pregnancy with the Terra Pluvialis duo. 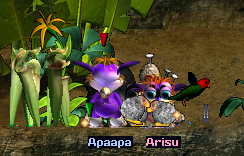 As one twin is born, the other girl in the Silence Falls group falls pregnant. Bertrand is, again, barely different from his parents, with only minor pigment changes to differentiate him from them. 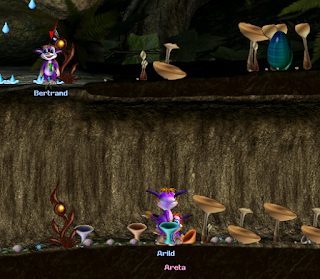 His twin is not identical, and is possibly the most interesting new addition yet, although still not overly mutated. Along with the minor pigment changes that seem to be standard, Burenda has a slightly raised prostaglandin gain gene, and her initial concentration of energy activates at childhood rather than as an embryo. She's alive, so it doesn't seem to have affected much. I should mention that I'm using Farbe genomes, so colours can change only through pigment bleed and are based on CFE genomes. Perhaps this could also be why there are so many tiny colour shifts? From here on, I'll mostly be updating with interesting mutations and major events, such as a complete shift from generation to generation, or an extinction. 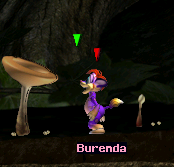 This seems like a good point to end on for now, so see you next time! I can't wait be making regular posts again.