There's been a sickness making its rounds of the group lately, and it adds an antigen and alcohol. Cervid was infected most recently, and is still quite drunk as a result.

Altaica, having separated from Toklo for the moment, frolics with Checker by the pond. 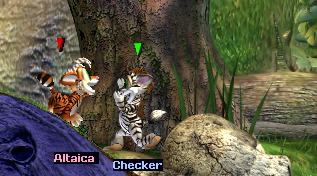 She eventually leaves Checker alone, and goes off to argue with Cervid over an apple. He's just been sick, Altaica, please let him have the apple. 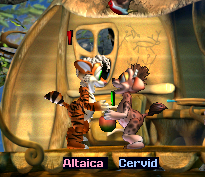 Toklo doesn't seem to mind Altaica's moving on, the dragonflies are there to keep him company. 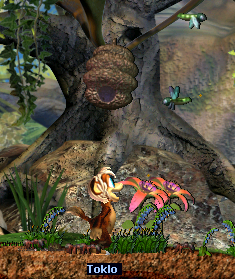 Viver seems to be in a lazy mood, preferring to lounge about in the crypt garden than to hang out with the others. 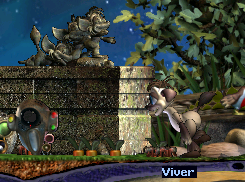 All norns have now reached the youth stage, and, helpfully, are all in the same spot, with the exception of Viver, who hasn't moved from the crypt. Hopefully we see some eggs happen soon.

Altaica and Toklo take a ride up to the top level of the terrarium, the first time they've spent an extended period of time alone together since they were children. And sure enough, they soon have an egg on the way: the first one in this world! Toklo is ecstatic, he's been saying 'Toklo coo Altaica' for a while now. Altaica has apparently been overcome with the urge to find a suitable nest for her egg. And food. 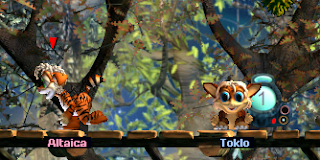 An old cabin was the spot where her egg would be laid, although it would soon be transported to the workshop. 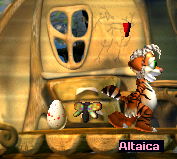 Checker and Cervid seem to be best buddies at the moment, although their friendship activities were soon interrupted by Altaica and Toklo coming to join them. 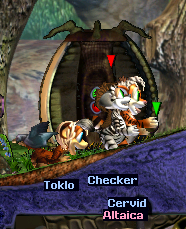 Right off the bat, Altaica has a potential heiress: meet Arctura! She's a nice blend of her parents; pretty much split between Bruin and Bengal. If she makes it through the IQ test, Altaica will have at least one successor. But Arctura will need to move fast; she's already infected with a bacteria. If she makes it through, I'll treat her, but if not, she'll have to fight it herself. 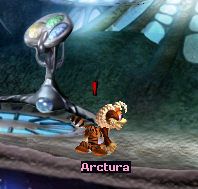 In the meantime, Arctura already has a sibling on the way, as Altaica and Checker are expecting now. She did manage to shake off that infection before it could do any harm. 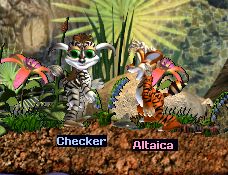 Hey, Altaica actually made it to the egg laying spot this time.

Viver has finally ventured from the crypt once more. I will admit, I gave him a nudge. But he needed it. 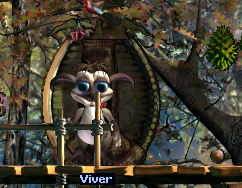 Back in the workshop, a very stripy baby has been born. Once again, its a girl, this time named Savannah! When she popped out, I noticed the medical monitor was red, and I panicked for a moment, thinking it was one of the children. But, it turned out Cervid came down with another round of that alcohol and antigen sickness going around. Unlucky guy. 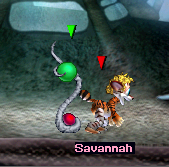 Arctura made it through the test, so Altaica is guaranteed an heiress, provided she stays healthy and alive. 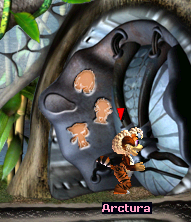 Everyone is in one spot for the first time in ages! Altaica is being absolutely showered with affection.

On that note, I'm going to end this post here. It actually went well this time, so I'm going to try not to touch it too much from here on to avoid it getting wiped again. Hopefully Savannah makes it through, and we see some male children soon.
Posted by Fuzzlet at 23:20