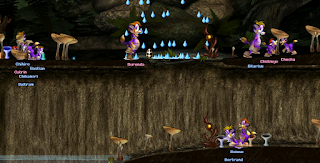 Terra Pluvialis Group
Initial Population: One male, one female
Current Population: Five males, five females
Total Population: Ten norns
Significant Details: Has the highest amount of population growth across all populations, having more than quadrupled since the beginning. One baby has a slight yet probably noticeable pigment mutation exclusive to males that will activate at adolescence.

Report
First off, I'd just like to say that nothing went as I expected here. I know the Lost Cave group had to wait for the starting female to recover between pregnancies, but so did the Terra Pluvialis group, and they had only one of each gender to start with but still became the group with the most growth. The survival of the Lost Cave group is really banking on the survival of those two females while the adolescent male matures, because otherwise they're back to square one: one female and two fertile males. It is truly unfortunate that the one infertile male was born in the group that needs the most help, and it doesn't help that this group has had a lethal mutation show up. The Terra Pluvialis group is the only group that hasn't suffered a loss thanks to bad genes yet, but the Lost Cave group is the one that gets hit the hardest by unfortunate mutations due to having such low numbers.
EDIT: As it turns out, that 'infertile' male was not, in fact, infertile, as he just got one of the girls pregnant. Perhaps I need to brush up on my gene reading skills!
The Terra Pluvialis group is doing exceptionally well, considering their lack of space and starting numbers. They went through a hungry phase because they ate all the raspberries which I could not seem to reintroduce, but I found the seed planters built into the metaroom, so all was good. Hopefully the young male with a colour shift manages to pass those genes so I can look at something that isn't plain Chichi norns.
The Norngarden group is definitely helping my eyes in that avenue; grendel armed norns popped up there and seem to be spreading, much to my delight. Norns with grendel tails, arms, or legs always look awesome. They also don't typically happen as soon as the second generation, so I'm very pleased with the Norngarden group. Their numbers didn't explode as much as I had expected, but that is okay.
Finally, the Silence Falls group was the unexpected winner in the numbers category. I thought that their growth would be curbed a little by only having one male, but apparently the somewhat confined space aided with reproduction. That could be why the Norngarden group didn't have a massive population boom; their home is a little more spread out. I was expecting a lot of children in Silence Falls, but nowhere near as many as there turned out to be.
In any case, that wraps up the first Seskorix evaluation! We're already seeing a few changes in the way of appearance, and I can't help but root for the Lost Cave group. Perhaps any creatures I put there are doomed to have bad experiences, kind of like any Magma norns I have. Hopefully they manage to turn things around, and hopefully the other groups continue to excel.
Posted by Fuzzlet at 23:54