After having a taste of regular events happening in the second BioWolf world, I've decided to make an adjustment to how frequently events will happen in Vaspilia. Instead of one event every time a new queen is crowned, there will be an event every time the current queen reaches an hour milestone. New queens will still have their reign introduced by an event, but the effects of their event will be doubled. For example, with the 'Infestation' event, usually only one stinger hive would be introduced. But if that event were rolled for a coronation, two stinger hives would be introduced. In addition, the 'Migration' event is now reserved only for new queen events. Having to move metarooms every hour or so would be more trouble than it would be worth! With all that said, when I loaded the world, Altaica was exactly one hour old. So, that means it's time for an event!

Standard Event #1
I rolled a three, which corresponds to the Infestation event. Speak of the devil, I guess. While I was attempting to get a hive established, which I still haven't managed due to stupidity, Altaica got pregnant with Toklo again. She looks so happy, eating those apples. That will end quickly once I get the stingers here. 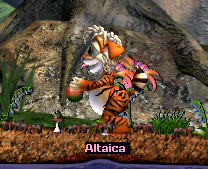 I finally managed to get them settled, and they chose the crypt garden as their home. Good luck using that area in the future, you guys.

In the meantime, Savannah made it to the meso! She and Arctura seem to get along. 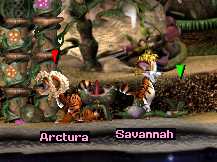 In the workshop, the first second generation male hatches. His name is Ferox, and is so far the only norn to inherit that Bengal face.

Altaica has taken a turn for the worse since laying Ferox's egg, she's been pacing around the learning room door for a while now. She's shivering, and seems to be in pain. The medical monitor says there's nothing in her system, as does the hover doc. The x-ray tells a different story; her spine and fight or flight organ are both dead. Tell you the truth, I have no idea what the spine is. I can never find that one on any lists. Her gonads organ is only on a quarter health, so we might not be seeing too many more children from her. 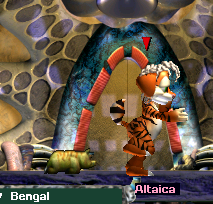 She soon went to Toklo and Viver for comfort, but they're both pretty shivery themselves. 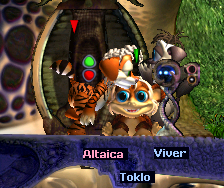 Altaica doesn't seem to be willing to let whatever's up with her drag her down, she's expecting Toklo's child again. Honestly, this is starting to feel like an accidental alpha run. 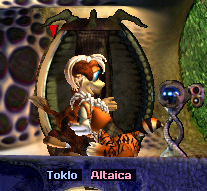 After laying her egg and having a heater added, Altaica seems to be doing much better! 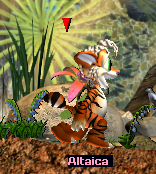 All the boys but Viver are hanging out in the canopy, loving the shade the leaves provide.

And where's Viver in all this? Right near the stinger hive. He isn't about to let a little thing like painful bugs stop him from enjoying the garden!

The newest boy hatched in the workshop again, this time somewhat more stripy. Ember is a pleasant sight to see, considering Ferox seems a little stuck in the hall. 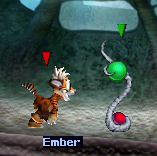 Two babies hatched today, which is what we got last time, so I'll end this here. I have to admit, Altaica's doing very well for having such damaged organs!
Posted by Fuzzlet at 23:34