Just at the end of the last post, a little Banana norn named Lanque was hatched. He flies through his initial learning stage, and on his way to learn about weeds and herbs he meets his fellow Banana norn Asma!

After learning all about weeds and herbs, he hangs out with Tarli and Krane the Pixie norns, who are very capable of blending in among the pot plants to have a playful round of kissing. The two actually kisspopped before, although no pregnancy resulted. It seems that Asma and Krane's little fling was never meant to last.

Things are going to get confusing soon: the newest addition to the group is another female Banana norn, this time named Echo! And because they're first gens, there probably won't be any major differences between her and Asma. Whoops. She went straight for the computer as soon as she got up the elevator. Seems like we've got a smart cookie here!

During a quick check to keep track of everyone, I find that Tarli has made her way to the desert island! I'll make sure to get some food over there so she doesn't starve. In fact, everyone is in different places right now: Krane is in the treetops, Asma is by the submarine, Lanque is on the underground raft, and Echo is still by the computer. C1 norns definitely seem a lot more adventurous than C3/DS norns, I'll tell you that!

By the time Echo has finished her learning, she has never come across another norn. This is fairly unusual, because there's usually at least one norn hanging around the garden to welcome the newest group member to the world. But everyone seems to have moved on to do whatever they please. I guess the garden lost its appeal after a while?

I guess it was time for a holiday: Asma, Lanque and Tarli are all hanging out on the island! I think I'll try to bring them back to the mainland, purely so they can easily find food.

I ended up bring Krane to Echo before bringing the island group home so she can learn what a norn is, and both parties seem happy with this turn of events! 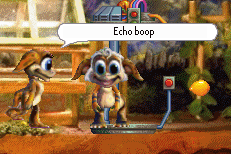 With a bit of vehicle and elevator juggling, I managed to get everyone home safely, although Tarli did have a munch on the ugly tomato. I guess we shouldn't expect any babies from her until she gets over that. Speaking of babies, it's time for the final first gen to hatch! Taenio the Purple Mountain boy is easily the most unique norn alive right now, so hopefully he's able to have some kids. 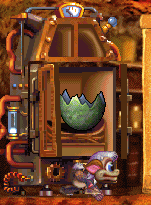 After getting tangled up with a group consisting of everybody but Krane, Taenio finally managed to get through his lessons, which means I can take a bit of a back seat for now. I am aware the C1 norns need a bit more attention, so I won't just turn my back on them, but I don't need to be constantly teaching them now either. He likes this posture, doesn't he?

In any case, I tired myself out getting everybody taught, so I think I'll leave this post here. I'm looking forward to seeing how everything goes from here!