Last time, the jungle population experienced a major population burst. Both groups now have 8 members, which is pretty good considering that the other time I tried to have a jungle population in an alpha run, I typically had one norn alive there at a time because they kept dying there. This time only one death has happened there so far!

Aquila watches over some of the newborns as they play by the pond. She remembers all too well what happened to Ujurak, the original alpha male, and she refuses to lose anyone else to the pond, especially not her daughter. She doesn't realise that there is a plant stopping this from happening. 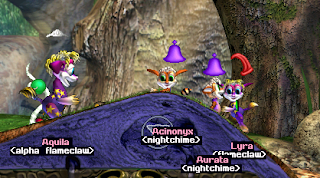 Baizli grew up faster than his brother Barzum, and I imagine he probably makes fun of him for this. Barzum did reach adolescence soon after this picture was taken.

Both of the Ribbonheart boys are older than Basil, who seems to be still a child. She can't be too far off adolescence, but it's still funny to see one triplet be so much shorter than the others.

Panthera was always much more disease prone than anyone else, and this eventually brought about her end. She died by the piranha pool, surrounded by friends. I swear, nobody in this run who has a set of identical children survives very long. Barzum and Baizli sit by her, understanding this time what has happened. Columba, who has never lived through someone's death before, doesn't quite understand what has happened, and runs to get help. 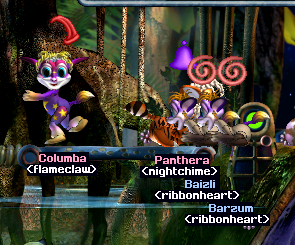 Diardi rests by the same rocket launcher that occupied so much of her mother's time before she was born. She crosses paths with Cirnah every now and then, or sometimes Basil, but she mostly keeps to herself. Just like her mother.

News of the recent tragedy spread quickly through the jungle, and everyone decided to huddle together to get through the grief. 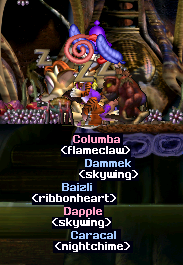 Well, almost everyone. Barzum went off to the bottom floor for some privacy to work through his feelings by himself, and Hydrus sought out toys to distract himself.

The learning room door seems to be the place to hang out right now, having attracted Diardi, Acinonyx, Lyra, and Lavender. 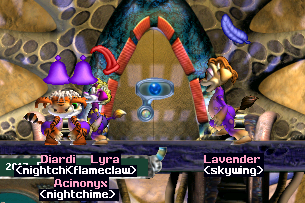 The illness spread through the jungle, and Dapple is it's next victim. Everyone is shocked. Dammek hides his face behind Caracal and Hydrus, not wanting his emotions known. It's okay to feel things, buddy. Anyone would. Barzum and Baizli can't believe it. This is the second mother figure they've lost. Barzum tries to rationalise what just happened, while Baizli can't take it and walks away. Columba's reaction is not much better than her reaction to Panthera's death, but at least she understands now.

Through all the death happening in the jungle, I apparently missed Aquila getting sick. She only has histamines and pain in her system at this point though, so I'm sure she'll be fine. 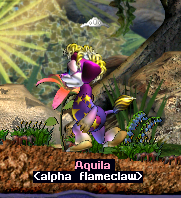 Columba seems to have taken Caracal in as one of her own, now that Hydrus has decided to explore. Neither seems particularly keen to leave the other's side! Perhaps she'll soon have more biological children to care for: she recently kiss-popped with Dammek. No result, but maybe one day. 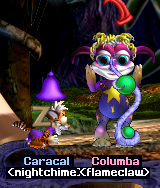 I'd barely finished typing that paragraph when it happened: Columba and Dammek kiss-popped again, and have four eggs on the way! Columba is currently the only female in the jungle population, and Dammek is the only male old enough, so it was bound to happen eventually. And after the double deaths experienced today the jungle norns probably need a bit of good news! This is the first time a pregnancy has happened in the jungle, so excitement is buzzing through everyone's minds right now. Dammek rests, apparently having tired himself out, while Columba seeks out a suitable nesting place. 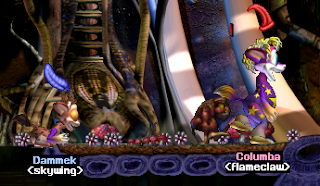 She picks the top floor as the spot to lay her eggs, and looks a little weary by the end of the ordeal. Caracal stayed by her side throughout the birth, comforting her through the pain. Where's Dammek in all this? He hasn't moved. Now it's Columba's turn to take a well-deserved nap. 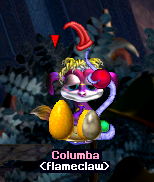 Lyra is sick, but she isn't going to let that stop her from hanging out with Diardi. 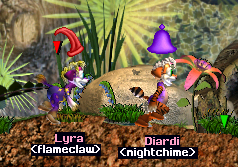 Columba's first egg hatches into a baby boy, but her happiness doesn't last long. He dies seconds after he hatches, and Columba is left in dazed grief. I hope they aren't identical. I couldn't move the egg to get a look at the child. 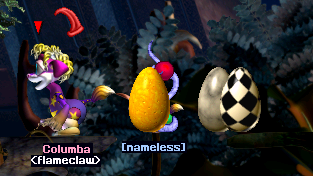 Unfortunately, this seems to be the case, as I only just have time to look at the second hatchling's moniker before she too, passes. At this point, I think Columba is immobilised by her grief. I'm heartbroken too. I'll let all the eggs hatch, just in case one does live, but I'm not getting my hopes up. 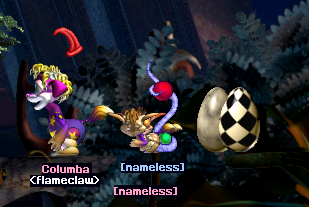 Two more norns are born. Two more died. Columba had to leave her nest, she couldn't stand to watch this go on. I could hardly bear it. She does take a moment to say goodbye to the final child's corpse. 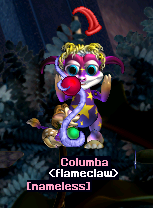 Well, that was depressing. I think I'll end this update here before my heart can be broken into more pieces. I didn't even get to NAME them, for crying out loud. Hopefully, next time will be more uplifting.
Posted by Fuzzlet at 20:37