Where we left off last, a new alpha was named: Aquila! This means the Flameclaws are currently the bloodline in control, and Aquila is safe from ever being exiled to the jungle. The other girls, Dapple, Panthera, Soleil, and even Aquila's own daughter Columba might not be so lucky as they are all currently subordinate females. Their only way now to continue their legacies is to have daughters of their own. But for now, lets look at how things are going in Keahiri!

This session started with a kiss-pop between Soleil and Cirnah, although nothing came of it. Dapple and Cirnah have both recently gotten over an illness, the same one that has been making its rounds of the population beforehand. Nobody has succumbed to it yet, which is good. 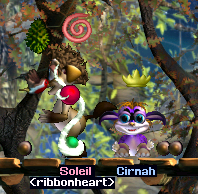 Aquila takes a rest away from everyone else, while her daughter wanders around in the bottom floor, having never seen another norn in her life. Great parenting skills, Aquila.

Everyone besides Soleil and Cirnah are quite isolated from each other right now, actually. Panthera is napping below the beehive, Dapple's pacing by the crypt, Aquila is lounging around near the entrance to the learning room, and Columba's still wandering around in the bottom floor. She seems to have taken quite an interest in the mechanisms of the ship! Soon, the all too familiar death music starts to play, so I moved her to a place that actually has food. 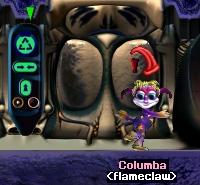 Soon, almost everyone is huddled by the pond. It does seem like a nice spot, with lots of shade and plenty of food to go around. 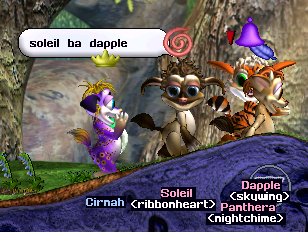 Aquila got stuck in a silly looking loop, where she constantly stood then sat and stood again as part of some weird dance. I can't show you the full extent of it, but it looked hilarious.

Columba doesn't seem to be the most of adventurous norn. Wherever she is, she stays. I put her near the crypt just so she wouldn't starve. And of course, as soon as I start typing this, she moves. Thanks for that. She's now with her mother though, so that's good. After I said that, Aquila went to the crypt.

Panthera and Dapple take a nap on the top floor together, which is very cute to be quite honest. 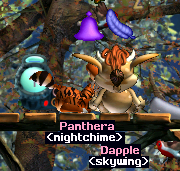 Soleil seems to have taken the task of watching over Columba into her own hands, making sure to teach her how to choose the best carrots. 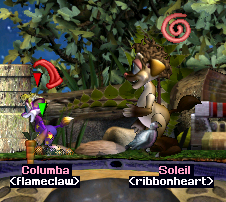 In the meantime, Dapple has fallen pregnant with twins. Hopefully one is female to continue the Skywing legacy, as once these eggs hatch, Dapple is off to the jungle. She lays her eggs by the pond, Cirnah and Panthera at her side. Perhaps they want to say goodbye to Dapple, and hello to the newborns? 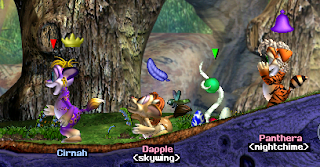 The trio moves away from the clutch, although Cirnah stays just close enough to watch over the eggs from a distance. Columba, having left Soleil's protective eye, comes to investigate the strange objects. The first of the two eggs to hatch is a boy named Dammek Skywing, and the second is a girl named Lavender Skywing.

Unfortunately, Dapple and Dammek must leave Lavender behind to go dwell in the jungle from now on. But this means that the Skywing line will continue a little longer through her, even though the rest of her family's chances might be slim. 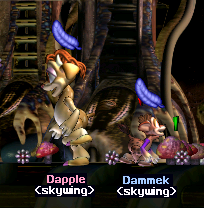 Not long after the Skywing's departure, Soleil ends up pregnant with three eggs. Looks like the Skywings won't be alone for long: they'll soon be joined by at least one Ribbonheart. I'm not gonna lie, I hope she has at least one daughter because I got really attached to her. 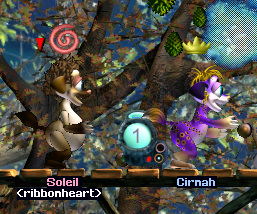 She lays her three eggs on the top floor, and watches over them carefully. She really is the motherly type, isn't she? 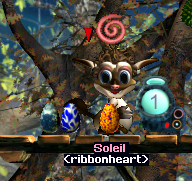 Turns out, sometimes you do get what you want! Soleil's children are identical triplets: two boys named Barzum and Baizli and a girl named Basil. Look at Soleil, she's so happy! I got scared for a second though: Barzum and Baizli hatched first, so I thought there weren't going to be any girls from her. 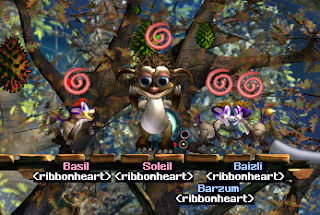 Unfortunately, it's Basil's turn to be left behind, but I have no doubt in my mind that she'll find friendship with Columba and Lavender, just like I know that Soleil will take good care of Baizli and Barzum. But there are some things they won't be able to save each other from, and will take great personal strength to push through. Hopefully, the Ribbonhearts and Skywings can work together to help each other take some weight off each other's shoulders, and survive in the harsh environment that is the jungle. 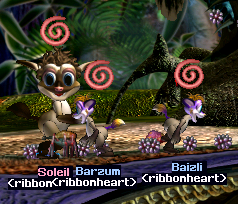 As soon as I typed up that paragraph about working together, Barzum immediately started slapping Baizli. Thanks for that. I'm going to wrap this up here, but from here on in this is going to essentially be the story of two populations. The jungle dwellers will receive no assistance, but that doesn't mean I can't watch them!