I've decided to give an alpha run a try! I've had alpha worlds before, but they've never made it very far. Hopefully this time will be different! I'm going to be using rules very similar to the ones laid out in the initial concept post on Discover Albia, which are as follows:

- There is always only one mature male in the general population: the alpha male.
- There is also only one alpha female, who is the first female to lay an egg fathered by the new alpha male. She can have as many children as she desires.
- There is no limit to the amount of females that can be in the world at any given time, but they must pass an IQ test before joining the population.
- Any female that is not the alpha is regarded as a subordinate female, and can only have one litter before being exiled to the jungle.
- Any male that is not the alpha is regarded as a subordinate male, and is exiled to the jungle along with his mother. They do not have to pass an IQ test, and all exiled norns will be treated as part of a wolfling run.
- Only males that are the sons of both alphas can become an alpha male, and are instead known as beta males. They are raised in the norn meso until they become a youth, at which stage they are exported. Any that don't become the alpha are exiled, and all have to pass an IQ test to be in the running.
- Multiple births have been activated.
- All norns will take on the surname of their mother.
- One new first gen norn will be added every time the alphas change.
- When one alpha dies, the other must retire.
- The main population will be situated in the norn terrarium, where the doors have been locked and all elevators have been replaced with elevines. The jungle will receive the same treatment.
-CFE norns are being used.

Alright, now that the rules of the run are out of the way and the world has been set up, we can now move on to the fun stuff: actually watching the norns! I'm starting with four females and one male, and as they are first gens I won't be subjecting them to an IQ test.
The first norn to hatch is a Fallow girl named Dapple Skywing! She immediately started eating all the food in the general vicinity. 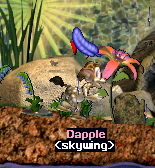 Next is Aquila Flameclaw, an Astro girl who immediately started beating Dapple up. Bad Aquila. 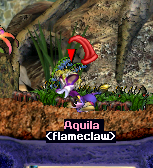 Soleil Ribbonheart quickly followed, a Siamese girl who caught a bacterial infection practically as soon as she hatched. Nothing came of it, and she shook it off as quickly as she caught it.

Panthera Nightchime is the last female to hatch, and despite sharing her appearance and name with ferocious predators, is actually quite mild-mannered.

Last but not least, the future alpha male Ujurak hatches! Like Soleil, he immediately caught and fought a bacterial infection.

Dapple, Soleil, and Aquila all relax by the pond, barely in sight. Ujurak eventually joins them, and they all snack on apples and seeds.

Panthera, being shy, prefers to play with the rocket launcher rather than join the pondside feast.

Dapple, Aquila, and Ujurak start getting rather affectionate with each other, and Soleil decides that finding more juicy apples is a much better way to use her time than that.

Aquila and Dapple decide they've had enough, and go to join Soleil. Ujurak remains by the pond, apparently mesmerised by the serene atmosphere and the dragonflies. 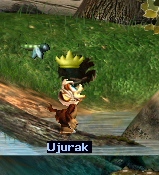 Soleil and Aquila, bored of what the ground level has to offer, venture up to the top floor, where Soleil promptly started attacking Aquila. Dapple came up to intervene before long! This picture was taken seconds before the brawl began. 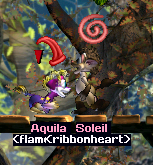 Panthera is still near her rocket launcher, and I had to drag Ujurak out of the pond before he drowned. Turns out I wasn't quick enough, and he died anyway. Whoops.

I'm going to leave this here, see you next time!