Whoops, it's been a while. I guess blogging everyday for four days straight is not in fact the best way to keep your focus. Anyway, it's time for another update to the Matriarch run! The new rule for a new queen being chosen is when the current queen has three heiresses, that is when a new one will be chosen. As Asteria has well over three heiresses, her time is up, and it's off to the creatures folder for her. Here are the candidates for the next queen! Unless I missed some during importing, there are seven of them.


Rook Leaf and Curlew Fang are part of the same litter, and are identical, so I'll introduce them together. They have a brother in the main population called Shadow Cloud, and the three of them bring a very interesting trait into the gene pool: they can safely eat detritus. It isn't as nutritious as the usual food a norn would eat, but it's better than nothing. This is a very beneficial gene, so I'm really rooting for these two girls!

Dust Stream and Crane Flight are also being introduced together, as I soon realised that there are seven norns and that would be a lot of individual pictures. Neither of them have particularly special genetics from what I recall, but Crane Flight's gargoyle arms (which I love) are enough to make me want her to do well. 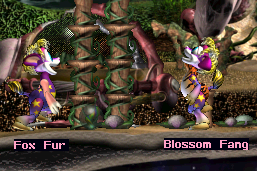 These three don't bring anything special to the gene pool, but are cute, so good luck to them as well! It's now time to introduce them to the main population.

I put them all near the bees, and Hail Stripe immediately went for the jukebox. Soon after, Shade Feather decided to start dying again. I'm not helping him this time. Burdock Leaf was also struggling a bit, but seemed otherwise okay so I moved him back with the rest of the group and he soon recovered after a few carrots.

Blossom Fang is the only female so far to have ventured far from the bees, having taken the cable car to the treetops. Everyone else seems to be too distracted by each other and the food to wander! Crane Flight became an adult too fast for my liking, so I removed her. She didn't show up as a fast ager on the Norn Statistics agent, but she was an adult at 30 minutes when everyone else reached the youth stage at about 40 minutes! Blossom Fang ended up rejoining the main group of girls after this. Maybe the two didn't get along?

I almost forgot to add in a new male! This one's name is Periodic Zephyr, and he's one of the dusky boys from my BioWolf run. I've always loved his colours, so hopefully he does well. He's an adolescent at the moment. While I was importing him, absolutely nothing happened with the females. Time to try moving them closer: near the pianola should work. As I was doing that, I noticed that Heather Talon had become old. Asteria probably wouldn't have been too far behind him had she stayed longer. Shade Feather is somehow still kicking, but probably not for much longer, since his life force is on 0%.
Anyway, this post has gone on for too long. We'll find out who the next queen is next time. On an unrelated note, what sort of thing would you guys like to see on this blog? Leave a comment if you have anything you'd like to see!