Last time in this run, a slap pile was formed, Curly died, and Andromeda became a youth. Who knows what could happen this time? Let's find out! As soon as I returned to the world, I was instantly greeted by death noises and slapping. I found that Bacary has the same disease that killed Curly; hopefully he's able to fight it off. He managed to shake the fear toxin with relative ease, and apparently someone's found the knowledge stone, as everyone is currently saying 'nono'. 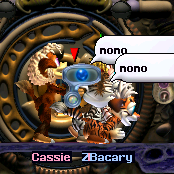 Takua has been slapping Wendy again, but then Wendy got pregnant with him. Hm. In any case, that's 5 points for each of them!

Wendy and Takua are relatively isolated from the rest, hanging out near the door to the Norn Terrarium. They both eventually spread out along the top floor though. Now Wendy is near that door, while Simon, Zed and Takua are gathered near the elevator. Takua goes back and forth between the boys and Wendy.
Meanwhile, Cassie has become pregnant in the fight pile. Bacary is the father of this egg, having bounced back from his illness. Pyra and Andromeda became pregnant at roughly the same time as each other, the fathers being Bacary and Zed respectively. Bacary's doing well in this run! Unfortunately, Cassie died shortly after laying her egg. Perhaps the pregnancy was too much of a strain on her in the midst of the slap pile? She still has a chance to earn more points, however: she does have one child.

Things aren't looking great for Andromeda either. She has two bacterial infections currently, and is loaded with muscle toxin and antigens 3 and 4. Gross Sacrifice and Simon seem to have dodged most of the infections, as they spend most of their time on the bottom floor in relative solitude. Gross Sacrifice is starting to grow his antlers, and Simon's pelt is becoming more and more like the night sky.

Bacary always seems to be looking for trouble, and is the main instigator of the slap pile. Right now Zed is the victim of his fury.

Something concerning happened: I lost track of Wendy. She wasn't in any of the usual spots, and I soon figured out that she was in the lower floors. I keep forgetting that they are a thing, as I rarely have any norns venture in there. She seems slightly worse for wear, and a quick glance at the medical monitor reveals she has histamine B and pain in her system. Andromeda has fought off the antigen 4, but the muscle toxin and antigen 3 are still strong in her. But they soon disappear, leaving her with just the bacteria: if she can shake those, she's golden!
Bacary is currently infected with antigen 4, and something I never thought would happen happened: the slap pile dispersed! Only to move to the elevator. It's a start, I suppose. Wendy is once again pregnant, and Bacary is the father. These two are the only norns who have had more than one child each so far.

Simon and Gross Sacrifice died at about the same time, although they were in different areas of the jungle. Gross Sacrifice had a similar illness to what Andromeda had, except the antigen 4 was replaced with antigen 6, but he unfortunately wasn't able to shake it. Simon's death was also the result of sickness, but it was sleep toxin and antigen 5 that got him. Neither had any children. Pyra is also quite sick, and it seems as though it was her who found the knowledge stone, as she knows her vocabulary. She seems to be fighting the antigens well.
Andromeda and Takua are having a child now, bringing them into the ranks of multiple child havers. Soon after Andromeda laid her egg, she and Wendy got in a fight. Please don't tell me there's a love triangle in this wolfling run, I never asked for this. At the moment, the norns are divided into three main groups: Andromeda, Takua and Wendy by the Norn Terrarium door, Pyra and Zed near the top floor elevator, and Bacary by himself near the bridge door. It's probably for the best he has some alone time, he's one of the most slap happy norns this run. Takua's group is now the source of most fights, and literally all of them are to blame.
Kiss-popping is a common sound at the moment, but it's usually fruitless, except for Pyra and Zed, who are expecting. It's their second egg for both of them, which means they have a huge point boost. Bacary still has the most eggs out of anyone, and now that he's stuck on an elevator with Pyra and Zed, he has two slap outlets. Great. Zed did manage to escape to the ground floor though. At the moment, he's the only one not on the top floor. 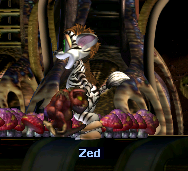 Wendy is pregnant once again, and Takua is the father once again. Pyra is also having her second child with Bacary, so I guess now is the time to revisit old romances? I'm going to finish this session here, as it has been absolutely packed with happenings. Again, the points are below, and the total number of eggs has been added. So far, Bacary's in the lead!

EDIT: Everyone now has the correct amount of points.