This session started with several slap fights between Wendy and Pyra, as well as Andromeda being sick. Pyra managed to shake a bacteria, which promptly passed to Wendy. Andromeda is stuck at the door. Everyone is hungry for starch and hates each other. I think I might add a few potted plants next for the next round, just to avoid the mushrooms running out in the future.

Pyra ended up infected with sleep toxin and antigen 7, and similar diseases have never ended well for anyone in this run. Pyra seems to be an exception, as she quickly fought off the sleep toxin. Wendy also caught this disease, and then got in a slap fight with Pyra again. None of the norns who got sleep diseases had to put up with enemies, so while she shook the toxins quickly, she ended up with high pain levels which took a while to get through. Andromeda moved to the elevator.

As soon as I thought Wendy had recovered, she got even more bacteria, with a total of three, and an unhealthy dose of histamine B and antigen 0. The antigen left her system quickly, as did the bacteria, but the histamine always takes a while to work through. It seems to be causing her a lot of pain, and the death music is playing quite often now. Pyra and Andromeda moved to the ground floor, and just go for a bunch of elevator rides. Pyra becomes infected with antigen 1 and a full dose of histamine B. A full dose is pretty much the standard dose in this run. Andromeda managed to lose one of her bacteria, but quickly gained another in its place. No toxins for her though. 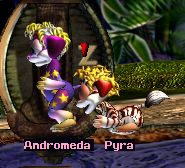 For the first time since they were children, the group manages to momentarily be clear of any trace of infection! Andromeda then proceeds to get a sleep toxin/antigen 5 combo. I guess things can't stay good even for a few seconds in this run. Unfortunately, this ended up killing her. Now only Pyra and Wendy remain.

Pyra gets a single bacteria, and so does Wendy, but Wendy's loads her up with histamine B and an antigen. Like usual, she fights off the antigen much quicker than the histamine. Afterwards, she gets immediately hit by another sleep antigen duo, and I fear her luck may have been spent on the first time she fought that sickness. That and she's still fighting the histamine from before. She has antigen 5, which seems to be attacking her heart, which soon fails. That can't be a good sign. She died before long. Only one remains.

Pyra's all by herself now, and she chooses to hang out near the bridge door: the previous location of the slap pile. It's sad to think that there used to be enough norns in the jungle for there to be a place where they congregated, then got surprised when they felt crowded. I wonder if Pyra's looking back on her time spent in the pile? After this picture was taken, she had a very sad expression on her face. Definitely reminiscing.

She eventually ends up with a histamine B/antigen 1 combo, but stayed remarkably healthy beforehand. She successfully fought the histamine after a while, but continued to cough even after it was gone. I'm going to stop here, and I most likely will not track the rest of Pyra's life as she is not doing much. So next update we will most likely be looking at the next generation of norns! See you next time!