Hello everyone! I've decided to mix things up a little bit here by starting a community wolfling run! Because let's face it, there's only so many consecutive matriarch run updates anyone can handle before getting bored. Over on Creatures Caves, ten users submitted ten norns to survive for as long as they can, and produce as many children as they can, in the Jungle Terrarium. I have the bacteria nerf cos file installed, so instant death thanks to ATP decoupler shouldn't happen. After all, guaranteed instant death doesn't prove anything and is more than a little unfair. Any ways out of the jungle have been blocked, as this is confined to the jungle.


There will be two rounds in this run: the first one will be the submitted norns attempting to survive and reproduce, and the second round will be their children doing the same thing. The grandchildren of the original norns will be uploaded for adoption on Creatures Caves. The original norns will earn points through the following methods:
- 1 point for every ten minutes alive
- 5 points for every egg that the norn is a parent or grandparent of
Whoever earns the most points wins! The norns that will be a part of this run are all first generation, and there are five males and five females. Here they are:
- Gross Sacrifice the male Fallow Norn (yluklun)
- Zed the male Zebra Norn (Uzag)
- Bacary the male Bengal Norn (Floh)
- Simon the male Astro Norn (Zzzzoot)
- Takua the male Chichi Norn (Calliope812)
- Curly the female Bengal Norn (savannahs11)
- Cassie the female Bruin Norn (Linda)
- Wendy the female Chichi Norn (Arnout)
- Pyra the female Zebra Norn (Pilla)
- Andromeda the female Astro Norn (gemverse)

Now that all the information is out of the way, it's time to start! Andromeda is the first one out of her egg, and is immediately bitten by a mosquito. I'm not going to lie, I actually had to double check that they were mosquitoes, and it turns out they're actually called mossie flies, but mosquito works just as well.

Next out are Takua and Wendy, the Chichi norns. They popped out on opposite sides of the jungle, and Wendy has made fast friends with Andromeda! Both Chichis ended up quickly learning that mosquitoes are painful: one of the first lessons any jungle dwelling creature will learn!

Bacary is next, and hatched near Takua. He came out as happy as could be, although that might not last long given how hostile his environment is.

Not long after, Curly hatched! She quickly took an interest in the elevator she hatched near.

Cassie is the next to hatch, and is the first norn to leave the ground floor!

Next up is Pyra, who joined Andromeda and Wendy's group straight away.

Gross Sacrifice and Zed hatched at about the same time, but separated before long.

The last to hatch is Simon, who hatched in a slightly more isolated position than the rest.

Already, Gross Sacrifice and Wendy have been infected with bacteria, and while Wendy is currently unaffected, Gross Sacrifice had glycotoxin in his system. He quickly fought it off, which is going to be an invaluable skill in this run. Cassie has also been infected, but has no toxins yet. Takua got in a slap fight with Wendy, which probably isn't helping her infection.

Andromeda came down with a particularly nasty strain of bacteria, one that infected her with fear toxin and antigen 1. It spread to Curly, but both norns fought it off very quickly. Simon and Takua have bacteria that are currently doing nothing, and Bacary and Curly have been kissing in the elevator. If those two live long enough, perhaps they might end up with an egg? The sounds of sneezing are abundant, which is to be expected in the jungle. Despite this, everyone has managed to fight off their infections, which is always a good sign.
Bacary had a bout of relentlessly slapping Takua, which may be revenge for Wendy, but still not a good sign. Many slap fights have happened, but there's also been a lot of kissing. Perhaps they feel crowded? The main group that seems to be the cause of the fighting is Wendy, Takua, Bacary and Simon. The main thing showing up on the medical monitor at this point is pain, which I suppose is better than poison and disease, but still not great.

The population is starting to become adolescents now, and they have shown no signs of stopping fighting. This could be due to the fact that many of them have decided to congregate in a pile. And they wonder why they feel crowded! 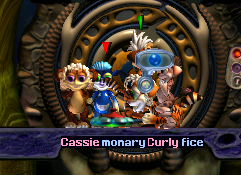 Pyra, Zed, and Andromeda on the other hand, are being smart and have distanced themselves from the fight pile. Pyra even exclaimed that she was happy right before this picture was taken! It's a wonder what not being trodden on and slapped will do for one's mood.

Andromeda has evidently had another infection, as she has alcohol in her system. Curly has an infection with has loaded her with fear toxin and antigen 6, and lots of it. She also has pain, but she is right in the middle of the slap pile, so that's probably what caused that. She managed to fight it off very well though. Someone, I don't know who, is letting out death moans. Turns out it was probably Curly, as she died at 30 minutes. Sorry, savannahs11. I guess that sickness must have weakened her more than I originally thought.
Death whimpers are still happening, and I don't know who is doing them, and slaps are also happening so I doubt that will help. I think I'm going to stop this session here. The norns' points so far are below. Also, Andromeda is a youth now.