It's time for a new update, and the jungle feels emptier than ever after the last update. Out of the ten original norns, only six remain. The gender ratio somehow managed to stay even though, which is always good. Bacary is absolutely loaded with histamine B, and he also has antigen 0 in his system, but there's much less of that. Still, he's always been a fighter, so I believe he'll fight it off. Sure enough, his toxin levels gradually begin to drop. Funnily enough, all the striped norns are hanging out together, and so are all the purple norns! What a way to divide themselves. 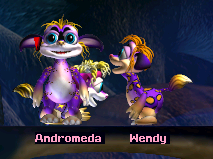 Takua and Wendy eventually wandered off to join the striped group, leaving Andromeda alone by the door. Death moans, sneezes and coughs happen about every five seconds, and I'm going to assume the moans were Zed as he died not long after they started. His death was followed by Wendy and Takua simultaneously saying 'eat norn' which wasn't concerning at all. He died with a look of terror on his face and pain in his system, which isn't doing doing a whole lot to prove the innocence of the two Chichis. 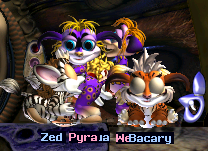 Takua is now infected with the same disease Bacary is still recovering from, and he got a full dose of histamine B just as quickly. He immediately shook the bacteria and antigen though, so he's probably gotten over the worst of it. Andromeda's been stuck by the door for a while, and I suspect eat elevator syndrome. I'll interfere just this once to try to snap her out of it, but only to do that: EES is about as fair as ATP decoupler. Meanwhile, Pyra and Wendy got infected with the disease going around. I decided to try to reseed the mushrooms as they have disappeared from most areas.
I injected the x-ray to check on everyone's health, and Andromeda's spine, muscles and fight or flight are all dead. The muscles being dead explains her odd gait that's currently going on, and I actually suspected that organ being dead before I injected the x-ray because I've seen that gait before in a gargoyle norn named Skanis. I don't know what the spine does, but it seems important and it probably isn't very good that it's dead.
Bacary also isn't doing well, as his heart and loci are dead, and his stomach, spine, fight or flight and lungs may as well be. Wendy, on the other hand, is perfectly healthy and just conceived another child with Takua. who is also in near perfect health. Pyra's kidneys and muscles are also dead. She's apparently healthy enough to get pregnant though, and Bacary is apparently healthy enough to make that happen, as he's the father. Either that or he's too stubborn to give up his lead in terms of how many children he's had.
Takua died peacefully of an unknown cause, and I'm not sure the others will last much longer. There's a lot of coughing and sneezing and slapping going on, and everyone except Wendy has at least one dead organ. Bacary is now the only male left, and his past rivalry with Takua makes him slightly suspicious. Takua's death was peaceful though, so Bacary's off the hook for now. He conceived another child with Wendy, and both are now the most prolific norns of their gender. He then had another kid with Pyra. I no longer have to check parentage because there's only one male left.
Andromeda made it down a floor, which is good. She's now focused on that elevator button, which is bad. She has now made it to the main group, which now consists of everyone.

There's coughing, but nobody actually has a full infection, only Andromeda and Wendy's bacteria which hasn't yet done anything. Wendy got adventurous, and found food. Bacary also got adventurous, and is now resting near the elevator. They clearly have very different priorities. Pyra and Andromeda haven't moved, but Pyra now has a heavy dose of histamine B. 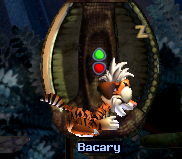 Bacary and Andromeda are going on elevator rides with each other, soon to be joined by Pyra. The three all end up on the bottom floor with Wendy, except Bacary and Pyra decide to go up and down for a bit. Wendy and Pyra get in a slap fight on the top floor, while Bacary and Andromeda take a break from being in a group for a while. 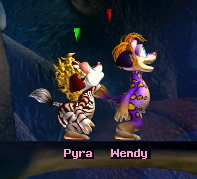 All the girls are now on the top floor while Bacary chills near the piranha pool, and death moans are once again sounding. It's often nothing though. Everyone except Andromeda has histamine B in their system. Pyra repeatedly slapped Wendy for a bit, followed by Wendy saying she doesn't like Pyra. I wonder why? Bacary died by the piranha pool, loaded with sleep toxin, antigen 5 and histamine B. That's the last male dead, so none of the girls are getting any more egg points from this round, and he maintained his spot as most prolific norn through pretty much the entire run. With just three females left, and in poor shape at that, this round is probably over soon. But they still have the chance to get as many points for staying alive as possible!
Pyra and Wendy seem to be spending a lot of time together, considering Wendy doesn't like Pyra. All three norns are on the top floor, and Andromeda is stuck by the door again while Wendy and Pyra get in another fight. Judging by Pyra's face, I'm assuming she lost.

Wendy's been slapping Andromeda for some reason. Come on Wendy, what did she ever do to you? Maybe she's lashing out because Takua was so mean to her. Pyra got stuck in a coughing pose for a while, which looked very ridiculous.

Andromeda's had that look of fear stuck on her face for a while now. Good one, Wendy. Wendy ended up saying she hates Andromeda. I'm still not sure why. Again, what did she ever do to you, Wendy? Pyra and Andromeda are hanging out now. Probably because they haven't been hitting each other. As soon as I said that, Andromeda started beating up Pyra. Thanks for that. Pyra flung a rocklice through the air Albian carrot beetle style, which was not a thing I knew could happen, and was hilarious to watch. Their tool tip says they are ferocious, and it got flung around by a norn. Amazing. Andromeda has two bacteria, one of which has given her a big amount of histamine B, the main toxin present in this run. Currently, everyone hates or dislikes each other.
I'm going to leave this session here, so see you next time!