Man, I really have a tendency to abandon this blog for ages, huh? Sorry about that. I actually suspect I may have ADHD, which could be affecting my ability to focus on things. Something I wish I'd figured out before graduating school, but oh well.

Anyway, to try to get back into the swing of things, I'm going to try something simple. Just a basic, run of the mill wolfling run. No gimmicks, I just make sure there's no drowning risks and such and hatch some creatures. Shouldn't be too hard. There will be grendels and ettins present, so hopefully the grendels don't decide to be murderous.

The eggs are placed in the norn terrarium; once they hatch, they'll be free to go wherever they please. The first to hatch is a male Chichi norn named Rose Eye.

Next is someone who is much prettier than her name may suggest, a female Astro norn named Slug Nose.

Burdock Face the female Bengal norn was on the move as soon as she hatched; always good to see adventurous babies!

Kestrel Fern, a male Fallow norn, also legged it straight to the toys the minute he was out of the egg. Perhaps he and Burdock Face will get along?

Brindle Eye broke through the shell and was immediately met by Slug Nose; he ended up joining her and Burdock Face in their little sub-group. I really hope he does well, my Magma norns never seem to get very far, which is a shame because I love them.

Curlew Pelt was taking a little too long to hatch, so I did end up incubating her, but she's here now! Zebra norns are so cute, I couldn't not include one.

Now that he's had a little bit of experience in the world, Rose Eye has proven to be quite the adventurer himself! It is tiring work, though, it seems. 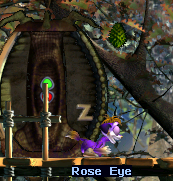 Kestrel Fern seems to prefer staying by the shore, under the shade of the tree that the other norns frolic about in the branches of. Burdock Face is quite happy to keep him company. 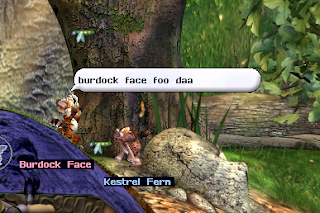 Brindle Eye has been shivering up a storm, but that won't stop him from having a passion for music!

Curlew Pelt, on the other hand, has become the norn who turned on the pulse switch. Thanks Curlew Pelt. 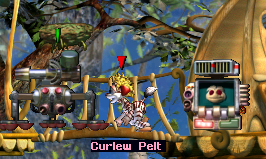 That's all for this post, but I definitely plan to write more soon: see you then!
Posted by Fuzzlet at 01:55