It's been quite a while since I've touched this world as the past two updates were scheduled, so please forgive me if I forget what's going on sometimes! I do remember that the Ribbonhearts are taking over the jungle and we finally got a beta male though.

Lerita seemed to have a slight kick in her gait for a few seconds, but soon stopped. Could this be a symptom of a disease, or just her genetics?

Lyra and Acinonyx get into a fight by the bridge door. Lyra seems to be a fairly aggressive norn! 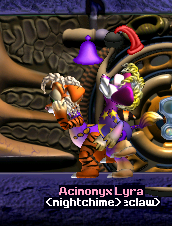 After my intervention, Cirnah and Aquila seem more keen on hanging out with each other. Nice to see they're finally acting like the alpha couple again. Lavender is also there, being the third wheel. 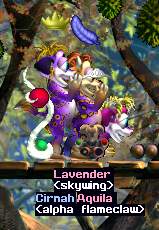 Fyrroc has grown up a fair bit, and is one of the few norns to have strayed from the bottom floor of the jungle at the moment. 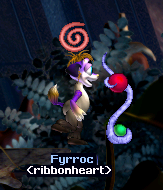 This is what the main group of the jungle looks like right now. Basil and Caracal seem to be quite friendly with each other, perhaps we'll see some eggs from them soon? 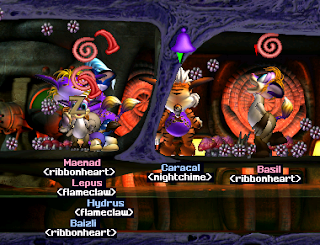 Here we have a rare picture of the alpha family all together, having a jamming session on the drums. 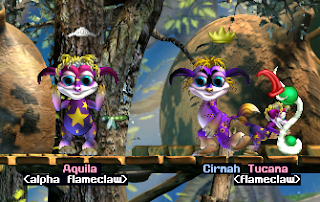 Tucana's brother, Scorpio, is leading a very different life to any of the other norns. He's currently on his own in the norn meso, stewing in his loneliness. Sorry buddy, I have to age you up away from everyone else. 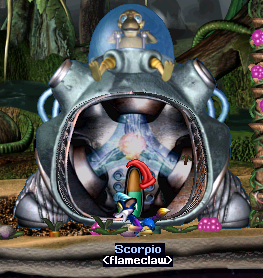 Basil, the only mature female norn in the jungle, is pregnant again. Fortunately, Caracal is the father of her single egg, which means I don't have to publicly shame anyone this time. 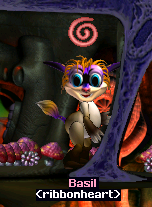 Lerita takes an interest in her future half sibling, and Basil entrusts her with it before retreating to the bottom floor again. Lerita was very excited, scampering off to the bridge floor with it. 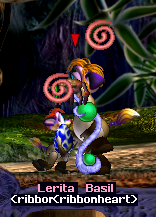 What Lerita didn't know was that Basil had a very good reason for leaving her egg with her: Basil died immediately after. She must have had a lapse in judgment in her final moments, as there were plenty of other family members she could have left it with, most of them both older and closer to her general location. In any case, Baizli is the only one of Soleil's children left. 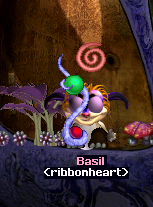 There must be a nasty plague going around, as Hydrus dies not long after. Lepus is now the only Flameclaw left in the jungle. 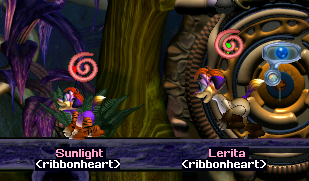 Baizli doesn't have to live without his triplets for long, as he is the next to die. I guess with the amount of Ribbonhearts in the jungle, fate decided to even things out? It's sad no matter what way you look at it. 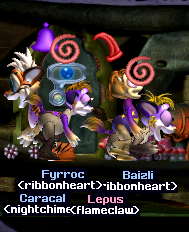 Almost in the same moment we lost Baizli, Aurata falls pregnant with a litter of four. With all the deaths the jungle has suffered and the drought of babies the terrarium has gone through, this will be beneficial for both. There will be new children in the terrarium, and there will be an adult female to take Basil's place while the younger norns grow up. 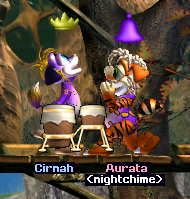 The bigger pregnancies always take a lot more out of the mothers, and Aurata is no exception. She lays her eggs on the same floor as the drums. Cirnah, as always, sticks just close enough to keep an eye on the nest. 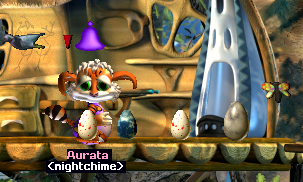 Nebula Nightchime hatches first, and is a girl. This isn't such a big deal for the Nightchimes as it is for other lines, but still good.

Bieti Nightchime, another girl, is next, and immediately joins her sister in playing among the gadgets. 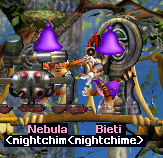 The Nightchimes are set to take over the main group, as the next hatchling is another female. Her name is Lybica, and she took an immediate interest in her unhatched littermate. 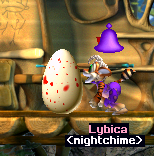 Another girl hatches, Silvestris Nightchime. This makes Aurata the first mother to enter the jungle alone.

However, Aurata will have the opportunity to reunite with her quadruplet, Caracal!

Now that there is once again a female of breeding age in the jungle, I'll stop this here.
Posted by Fuzzlet at 19:21