The girls are starting to get scores now, which should mean there will be some new additions to the world soon! I've found that with the Hera script, it's hard to end up with overpopulation as pregnancies aren't happening every two seconds like with a regular world, which is always good. This means that I should be able to focus on everyone to some extent!

Blaze has found her way to the lower level, and I'm fairly certain she is the first to do so. Good job, Blaze! 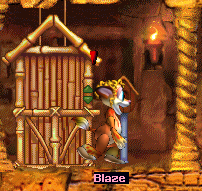 Meanwhile, the actual oldest norn, Thrush Fur, is the second norn to receive a score.

Titania eats lemons and curls up with the teddy bear just off the side from the main group. 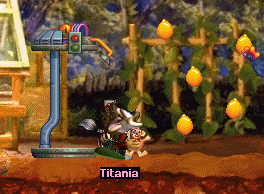 Marble hasn't moved from the beehive, but she won't be lonely for much longer: she's just become pregnant! She and Thrush Fur are definitely the biological parents of this egg, as they are the only ones with scores so far. 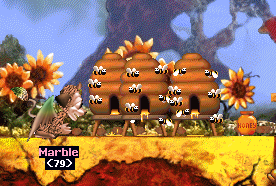 The main group disperses momentarily, apparently deciding they need a bit of space, before crowding together again.

Marble lays her egg, and proudly patrols around it. 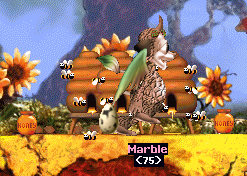 Corusca is the next to receive her score, while Thrush Fur's has dropped to a remarkable 35! 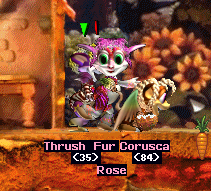 Rose joins the score club not long after! 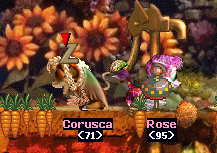 Soon, Marble is the proud mother of Moonstone, the newest addition to the world! 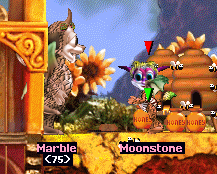 Away from everyone else, Blaze gains her score, and promptly becomes pregnant. I imagine this is probably due to her distance from the others. I genuinely have no idea what she's scared about though! I'm guessing that this egg is probably Corusca and Thrush Fur's, as Corusca has a score of 53 and Thrush Fur has 25. I think Thrush Fur is probably the best performing Hera norn I've had! 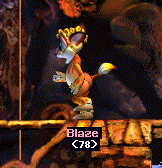 Blaze decides to lay her egg right in this corner for some reason, still scared out of her mind. I ended up moving the egg closer to the temple so I could keep an eye on it. Blaze abandoned the egg to go beat up Thrush Fur. I wonder what's gotten into her? 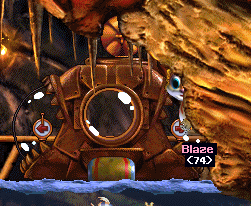 Fortunately for the egg, Titania comes to watch over it. Any child of Blaze's is a child of hers!

Moonstone, like her mother, has discovered the joys of the cable car. She's on a return trip to the beehives right now. 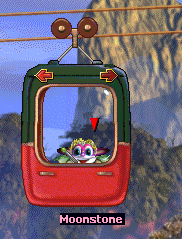 Titania's adopted egg hatches into a baby named Robin, and she gets straight onto teaching her how to find the best seeds. Despite not having a score yet, Titania seems delighted to be a mother to Robin! 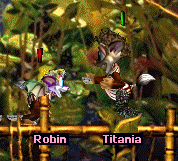 Marble has been teaching Moonstone all the best secrets of beekeeping, and Moonstone has been listening intently. 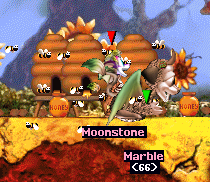 Blaze has returned to take care of Robin, sort of. She's still stuck in a state of permanent terror, it seems. Titania's just happy the whole family's here. 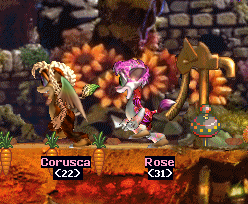 Thrush Fur has had her title of 'norn with the lowest score' overthrown by Corusca before long. 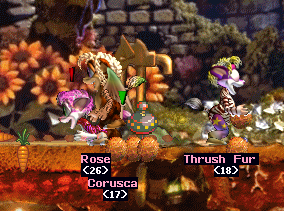 Blaze is pregnant again, and it's probably another Corusca and Thrush Fur child. Now something has Robin worked up as well.

Blaze lays her egg in the temple, and the death music starts playing. She eventually flees the temple, and I have decided to try to calm her down as this isn't fair for her.

As I was trying to coax some food into Blaze (her fear has been very distracting), Kestrel hatched! She definitely got some more carnivorous attributes, and immediately started trying to eat this bird.

I soon gave up on Blaze, as nothing was working, so I put her back with her family, only for her to start slapping an unperturbed Titania silly. She's really not doing well. With a bit of CAOS intervention, I manage to calm her, only for her to become scared straight away again. Could Titania be emitting grendel smell despite being a norn? Is that even possible? Because it's just about all I can think of. She and Robin have even taken to hiding behind the pianola. 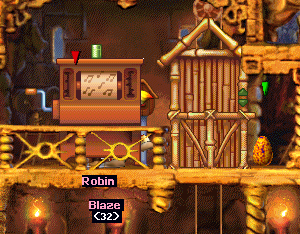 A quick look at the biochemistry set shows that this is not the case, as Blaze is not registering any grendel smell whatsoever. I have never been so confused by norn behaviour. If anyone has any idea what might be going on, please let me know as I have not got a clue.
Posted by Fuzzlet at 01:16