Echo's pregnancy went smoothly, and she is now the proud mother of this egg which will be floated in the ocean as soon as it is big enough! 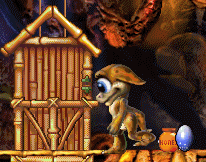 Taenio somehow managed to get all the way to the other side of Albia without any input from me whatsoever. Echo's journey happened because I guided her along the way, so Taenio is clearly on a whole new level.

I finally managed to get Tarli above 70% lifeforce again, but I look away from her for two seconds and she's pregnant again! The father of this egg could be either Lanque or Krane.

Echo found her way to the desert island again, so I decided to send her to Taenio's area so they could be isolated together.

Tarli's pregnancy means another egg in the world; she's squirreled it away behind that rock. Unfortunately, she always forgets how to eat when she's pregnant so it may take a while to bring her lifeforce back up.

Echo and Taenio sharing a confined space (not because I forced them to, they seem to have forgotten that elevators are a thing) has had a nice side effect: Echo is pregnant with what could well be Taenio's first child! He's the youngest norn in the world, so he probably hasn't had as much of a chance to breed as the other males. He may have fathered Tarli's first egg, but I wouldn't count on that. 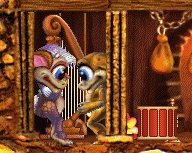 Another smooth pregnancy, although Echo was asleep standing up for most of it. She and Taenio abandoned the music room not long after conception, and they do seem to be happier for it.

As for Taenio, he immediately went straight back to the island. Boy wants his solitude, it seems.

While all the boys have been antisocial lately, Tarli and Asma have become best friends. I haven't seen them apart for quite a while!

Lanque has taken a preference for plants over the company of other norns lately.

But then he decides to pay Asma and Tarli a visit, and Tarli is forced to turn a blind eye as Lanque and Asma kisspop. Unfortunately, it didn't result in a pregnancy.

A lot of eggs have been laid today, so I'm going to stop now. I don't think I've ever been this invested in a C1 world before!
Posted by Fuzzlet at 15:24