Sorry I took a while to make another post! I've been a bit busy lately, but I should have more time to post now! First thing I did this session was to put Lanque and Asma in the computer room together, as they are the only two I can't prove have had children. They kisspop, but with no result.

Finally, a pregnancy happens! Except, the observation kit says she has a count of twenty seven? Isn't it supposed to start at one? It soon went to one, so it must just happen when the pregnancy starts. 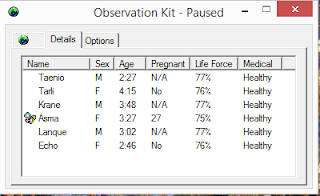 Before I was concerned about Lanque passing his genes, now Tarli is carrying his child too! But now the pregnant lady wants off the submarine. 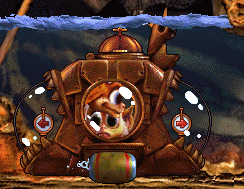 Taenio and Krane have been alone on the island for a while now, and take a moment to share the honey pot while they wait for the cart to arrive.

Tarli lays her egg and leaves, and the two Banana girls inspect it curiously. 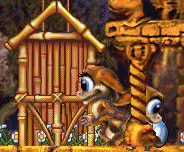 We now have six eggs ready to hatch, a good amount for the next generation! It won't start yet, as this time I am going to let all norns live out their natural life spans. I just thought it might be a nice thing to share. Besides, more eggs means more chance of a good gender ratio. If things do look like they might be unbalanced, I'll add in a first gen as well.

I brought the two island dwellers back to the mainland, where they enjoy some time in the garden with Tarli. Taenio has unfortunately proved to be a distraction to Asma, who was more interested in kissing her purple companion than eating.

Lanque has been enjoying a nice change of scenery as he kicks a ball around in the treetops. 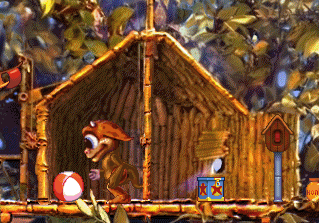 I was doing some rounds to check on how everyone is doing, and I walked in on Krane and Echo kisspopping. Again, no pregnancy.

Lanque descended from the trees to watch Taenio while he sleeps. Whatever floats your boat, Lanque.

Tarli was momentarily sick, but she managed to shake it very quickly. I suspect she took a bite of baobab.

Tarli seems to be pregnant again! I caught a kisspop happen in this crowd, so it's probable that Taenio is the father. Tarli is easily the most prolific breeder of this generation at the moment!

She lays her egg, and immediately decides she deserves rewards for this. She does. She very much does. 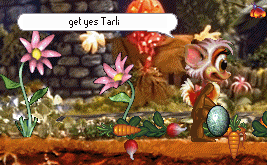 I sent Asma and Taenio to the island while I was trying to get Tarli isolated so she would eat during her pregnancy, but this had the side effect of Asma being too distracted by Taenio to eat. Again. Fortunately, once I sent Taenio away she gobbled the flowers like there was no tomorrow, and is now the happiest I've ever seen her! 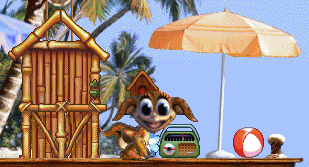 I left Echo alone for two seconds to feed Krane, and she gets pregnant with Lanque. That's going to be the second pure Banana second gen. I hope they're different genders so I have an easier time differentiating them. 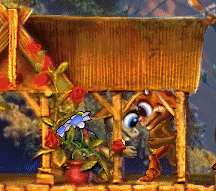 Many eggs have happened in this session, so I'm going to end here. Tarli is now five and a half hours old, which I'm fairly certain is the norn equivalent of being middle aged in this game. The population is doing well! This is definitely the longest I've ever stuck with a C1 world, so it's nice to have hit so many milestones at this point!
Posted by Fuzzlet at 23:51