Things got off to a bit of a slow start today, with Blossom Fang having just been born. The main population is in a business as usual sort of state, with everyone hanging out in the garden.

The only norn not in this group picture is Ivy Nose, Deer Stream's son, who seems to have inherited his father's tendency to stray from the crowd. He was near the pianola, and that area seems to be a bit buggy so I brought him back. He seemed very keen to rejoin the group, so perhaps he isn't as prone to wander as his father. 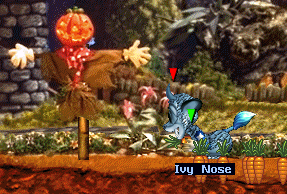 Just as I headed back to check how Blossom Fang was doing, she made it to the hall! It seemed like she was going to power through to the Meso, but instead she sat by the workshop door for a bit before heading to the Meso. After teaching her her vocabulary, I decided to look through her genetics. Disclaimer: I only have a very slight idea of what I am doing when it comes to genetics. I know only enough to determine what does what in the reactions and instincts. But from what I can see, Blossom Fang isn't too different from the basic genome. She's still cute though, and perhaps there are some cool mutations that I simply don't know how to see. There certainly doesn't seem to be any problems with her.

Meanwhile, Shade Feather's health had been declining. I heard the death music start playing, and a quick check revealed that his life force was at 3% and he was hungry for starch. I moved him to the area near the pianola with the seeds. However, he wasn't willing to eat any of them. He seemed to want to, but can't muster the strength to. I even tried tempting him with cheese. But nothing worked, and he continued whimpering helplessly. I lost all hope, and moved him back to the main group, not wanting him to be lonely in his final moments. As soon as I did that, he started gobbling lemons like there was no tomorrow, and went back to nap among the carrots. Why is he like this?
Asteria hit the three hour mark while the Shade Feather fiasco was going on. According to the Creatures Wiki, that means she and the other first gens that are left (Shade Feather and Heather Talon) are past the half-way point for their lives. Heather Talon, a Bengal Norn, used to hate Asteria, constantly getting in slap fights with her. Now they get along just fine, but I can't say he's my favourite after the way he used to act. Asteria will certainly have a successor, I think she has about eight heiresses at this point. My concern is that there might not be enough males by the time a new queen has to be chosen. There's been nine males for quite a while now, and that number shows no sign of going up. In fact, the population keeps threatening to decrease. Provided Asteria lives to the ancient stage, the other two first gens will probably die at about the same time as her, give or take. That decreases that number to seven. But who knows what could happen? I'm most likely going to add in some new blood in the form of some males from other runs when it's time for a new queen. At this point, it's probably going to be one of the dusky boys from the Biowolf run. Hopefully, this colouration gets passed on. See you next time!