I have lots of worlds that are already somewhat established. One of them is simply named 'Matriarchy', another example of why I shouldn't name worlds. Unsurprisingly, this world is a matriarch run, which could be considered a variant of an alpha run. I'm fairly certain I got the idea from the blog Designer Genes, run by Kezune. There's only one female in the world at all times, who is the mother of all new creatures in the world. When she dies, the first of her female children to lay an egg will replace her. All offspring regardless of gender must pass the IQ test to join the run, and female children are raised in the Norn Meso until they reach the youth stage before being exported so that all female children have an equal chance of becoming the new queen. I had the multiple birth chance set to about 50 or 60 percent, but that seems to be resulting in far too many norns, so I've set it to 1 percent. I don't want there to be no huge litters, but I don't want every single pregnancy resulting in massive population growth. The run is taking place in the C1toDS metaroom. 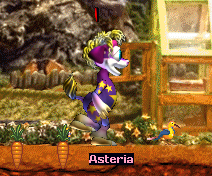 This is Asteria, the first and current queen. I chose an Astro norn because I love female Astro norns: they're so pretty! She has two potential heiresses being IQ tested with their brothers: Dust Stream and Fox Fur. If they make it through to the Meso, they might become queen!

These five are all from the same litter, and I'm assuming it's the most recent one, considering they're the only ones in the workshop with no eggs in there. Asteria hasn't been laying eggs very often, but she tends to go big or go home: if I remember correctly, not one of her pregnancies has resulted in only one egg. This is part of the reason why I've adjusted the multiple birth settings. I know having a lot of norns can be beneficial, but I also appreciate not having crowded worlds. 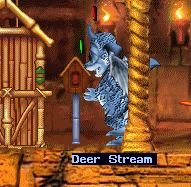 Deer Stream, one of the original males, has distanced himself from the rest of the group lately. I often have to coax him into eating multiple times when he's forgotten to find food because he simply hasn't been near any. He likes playing with the bell, which I honestly had no idea was a toy until he started playing with it. Hearing the bell toll was a bit of a shock!

All but one of the quintuplets have made it to the hall. Ginger Wing and Dust Stream went through to the Meso as I took the picture. Ginger Wing will join the main population after learning his vocabulary, and Dust Stream will stay here until she becomes a youth. As I was typing this paragraph, the entire litter made it to the Meso. I look away for two seconds and everything happens.
Deer Stream unfortunately died after not eating again. I wasn't expecting him to die then and there, considering I had just helped get some food into him. But I guess he'd just had too much malnutrition in his life. Just before his body disappeared, Asteria sat quietly next him, taking a moment to say goodbye. The two were very close friends in the beginning, and he was the father of Asteria's first litter. They were near inseparable until Deer Stream was overwhelmed by the crowd. Now I suspect Shade Feather, another of the original males, is her new favourite. I rarely see them apart, and when they are they're sure to be at each other's side again before too long! 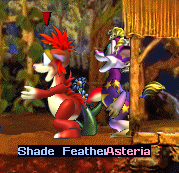 Asteria became pregnant again, and I'm assuming a Bengal/Astro called Burdock Leaf is the father. I moved her by the beehives to keep an eye on her. For once, she only had one egg, so she wasn't up there for long. She laid her egg, and was moved back with the rest of the population.

The egg hatched into a cute girl named Blossom Fang! I already love her, which, knowing my luck, means she probably won't end up queen. Dust Stream and Fox Fur reached the youth stage so were exported, and I think that's probably a good place to end this post. Hopefully Blossom Fang makes it through the IQ test. Even if she doesn't become queen, I'll probably find a use for those who didn't succeed. If I remember correctly, two of the heiresses are capable of safely eating detritus!