Hey guys! I'm Fuzzlet, and I'm new to the Creatures Community, but not the games themselves. I haven't been playing them for as long as some other people, having only heard of the series either this year or last year (I'm not great with remembering things like that), but I do know what I'm doing! Most of the time, anyway. I mostly play Creatures 3/Docking Station because I can't seem to get Creatures 2 to run decently on my computer or the norns in Creatures 1 to eat. C3DS also just fits my purposes better, it seems.


I decided to start this blog to give myself more motivation to keep runs going for longer. The longest running wolfling run I've had so far I only made it to generation 10, which is very long for me, but pales in comparison to some of the runs I've seen with triple digit generations! Most of the other runs I do rarely make it to generation 5. Some interesting mutations cropped up in that 10 generation run, though! A couple of dusky coloured norns appeared at one point, and I will admit that I used the inseminator to make sure that particular gene got carried on, as it seems like their unusual colouration made them unattractive to the others! The nice appearance mutations in my runs never seem to get passed on by themselves. Not so nice appearance mutations, however, are a completely different story.
I was doing IQ tests, watching an egg in the workshop keenly, waiting for it to hatch. You can imagine my surprise when a baby norn with a C1 grendel head popped out! That's not the best part, though. Something went severely wrong, so his head was completely detached from his neck. As he grew, the head got further and further away from his body. This didn't seem to affect him negatively by any means, because when I checked again later there were TWO norns with detached grendel heads floating above the crowd. It was at that point that I began to regret my decision to leave him in the run, but it was too late. Apparently female norns find floating heads from different species much more attractive than a slightly darker fur colour than usual. 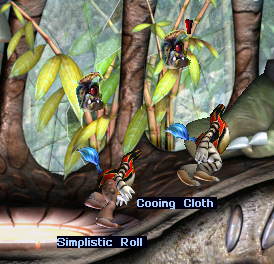 Here they are, in all their mutated glory, moved temporarily to the Meso for a good picture. Simplistic Roll is the original, Cooing Cloth is his son. When everyone else gets appearance mutations, they get stuff like grendel arms or legs, blue norns, or bruin heads. Me? I get this and a couple of dusky boys. And when there's only a few norns left with a trait I like, like gargoyle arms, of course they show no interest in breeding. And when they do, whoops, turns out that pregnant norn with gargoyle arms can't lay eggs. Go figure.

Here are the dusky boys, who, upon closer inspection, are doing better population wise than I originally thought. I also discovered upon closer inspection that the floating head population is doing better than I originally thought, as there is now a female floating head, who is also pictured above. I really need to cull this world a bit. It's hard to tell what traits are being passed, because everything's so crowded that I can barely tell where one norn starts and another ends. There's about 50 of them, and there's always eggs on the way! I might start IQ testing everything again. Everyone can go in the workshop, and only the strong will get out. Maybe this way they won't overcrowd the Biodome.
Anyway, I think I'm going to continue this run. Stay tuned for updates to the Biowolf run: proof that I am not a creative namer eighty percent of the time.