Time for another update on the new generation! Sorry it took so long. I ended up replacing all the elevators with elevines because what felt like everyone was stuck in there. Now they are all much more spread out!

Pebble Step is resting by the door like his parents before him used to. It's actually kind of cute, in a sad sort of way.

There's a huge gathering of norns on the top floor. Seems like this group just likes to hang out. Silver Face was by herself near the eggfruit tree near the bridge door for a while, until she was kicked out by some of the other norns. They definitely recognise the best spots, that's for sure! 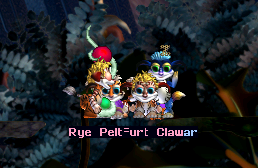 Marigold Fern has been stuck in a coughing pose near the piranha pond for longer than can be healthy, so I'm a little worried about her. Looking at this group really made me realise that for norns, Takua and Wendy were actually really monogamous: there are three purebred Chichi norns running around!

Despite being kicked out of her previous massive food hoard, Silver Face has found a new one: the very bottom floor. Mushroom spores tend to accumulate there, meaning that they grow there in much greater numbers than anywhere else. And Silver Face seems very proud of her discovery! She was later joined by Daisy Leaf, Dace Fur, and Stone Flight. I have to say, I've never had that many norns find the bottom floor in any of my other runs.

Bird Flight caught an antigen histamine disease, and like all who catch a variety of illness like this, shook the antigen very quickly. That's the more dangerous part, so that's good. The group is approaching adolescence now, and nobody has died, which is good for all of their parents. Death whimpers are abundant though, so that might not last long. Duck Leaf has caught sleep toxin, but he's right near an eggfruit tree so he should be fine. He also caught a few antigens and histamines, which I'm more worried about, and the sleep toxin took a while to take effect anyway. As long as he takes advantage of his position, I imagine he'll make a swift recovery! Unfortunately, the antigens did do a number on his heart and loci, so that will most likely affect him in the future. He and Daisy Leaf are the only ones so far to suffer severe organ damage, she has 20% left on her kidneys.

Silver Face caught a disease with sleep toxin and antigen 7, Oat Claw has histamine B and antigen 0, and Bird Flight has antigen 7. I probably missed someone's illness in that list, because it seems like a huge outbreak of disease is going on at the moment. Still, they're doing very well for jungle dwellers! Nobody's died yet, and the population is entering the youth stage, so they must have gotten some good genes. In any case, I'm going to stop here. Hopefully we'll have some babies happen next time!